UCEAP students are supported by a network of people throughout the world. Your study abroad experience will be guided by trained staff that are there to support you as you prepare to study abroad, when you arrive, and throughout the program.

By voice, text, or app for emergencies

The Bologna Study Center is in the cultural hub of the city near the Cineteca di Bologna movie theater and film archive, the Museum of Modern Art (MAMbo), and the Cassero, Bologna’s LGBTI+ center. The study center features a study room, a library, free Wi-Fi, and printing and copying facilities for students’ academic needs. A friendly group of interns help incoming students get to know the city and the university as well as practice Italian. The study center is a quick walk to Inlingua language school (where the intensive language programs are held) and the main university. Students often take their books to the Cineteca’s open access library and UniONE, the university’s most popular study hall, complete with a gym. Take a short walk to the small city park nearby—it's the perfect place to wander with a gelato or panino on sunny days.

Talk to study center staff about:

Study center activities may include:

A staff member is available 24/7 for assistance in case of emergencies by telephone, text message, or WhatsApp. Contact information is provided at orientation. 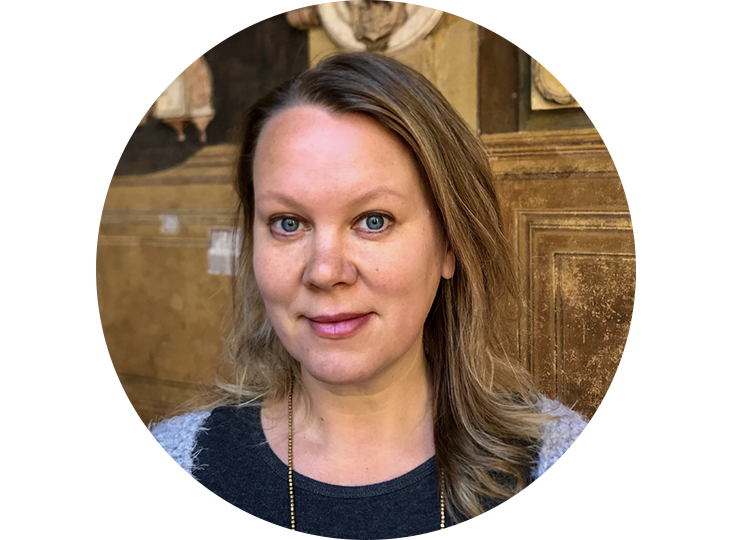 Maiju helps students settle into life in Bologna. She recommends taking part in the local student culture by volunteering and completing an internship. When a break is needed, join locals in packing a picnic and walking to the parks in the hills just outside the city—amazing views are guaranteed!

She says, “Life in a medieval city like Bologna is very different from a California campus. After almost 20 years here, I still sometimes stop on my bike, in awe of the beauty and history this city holds.”

Maiju hopes students will talk forever about the places they discovered, the Italian they learned, and the friendships they made. She hopes students leave Bologna with a stronger sense of self and purpose after living and studying in Italy.

Peggy helps students select coursework and prepare their curriculum vitaes (or résumés) for internships. She arranges internships and research projects. She enjoys helping students reach their academic objectives and envision their life path.

She says, “Be open-minded and act like a local.”

Peggy hopes students will increase their self-confidence, make lasting friendships, and clarify their post-baccalaureate plans while studying abroad in Italy.

To help navigate the transition of leaving home and going abroad, you’ll attend in-person and online events. At these events, you’ll have the opportunity to ask questions and meet the staff who will be supporting you while you study abroad. You’ll learn things like:

Most on-site orientations include a tour of the campus and local sites. You will also meet other students on your program and local students who will be part of your experience.

Students with dis/abilities can and do study abroad. A successful experience is dependent upon careful planning, coordination, and communication.

Focus on programs that best fit your interests, academic goals, and career aspirations. You'll work with the staff at the disability services and study abroad offices on your UC campus. They can help you identify strategies to remain flexible and think creatively about accessibility and realities abroad as some international locations can be different than what you are typically accustomed to in the US. They can also help you get the necessary paperwork you'll need to apply.

After you apply, your UCEAP program specialist will coordinate with the institution abroad and connect you with those who can arrange for an accessible experience. If your needs cannot be accommodated at any point in the process, your advisors will help you choose another program. You will not be alone in this decision.