Utrecht thrives on aesthetic beauty and the spirit of artists, poets, writers, and musicians. This laid-back town is authentically Dutch, boasting cobblestone streets, a castle, and canals. University College Utrecht is a small liberal arts and sciences college with courses in English. A tutor will act as your academic and personal coach while you study at the university. Discover the panoramic cityscape from Dom Tower, the tallest church tower in the Netherlands. Wander the medieval center of Utrecht with its gothic and Romanesque churches built when the city was a religious hub.

Located just 30 minutes away from Amsterdam by train, Utrecht is an attractive stop in the Netherlands. Students comprise nearly 20 percent of Utrecht’s population, giving the city a true university town vibe. The first university college in the Netherlands, University College Utrecht (UCU) is an elite honors college enrolling only 700 students in liberal arts and sciences. More than fifty nationalities are represented among the student body and nearly half of UCU students are from other countries. Special characteristics of UCU include small classes (no large lecture halls), private tutors, an informal environment, and interactive lessons. Built atop centuries of history, UCU’s campus today has austere brick halls and lounges which are often used for informal meetings, study sessions, and extracurricular lectures. Other features of the campus include a student garden, meditation room, and college bar run by students. 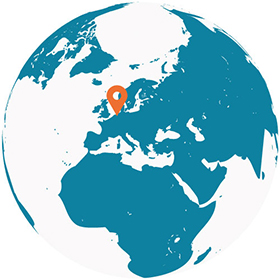 Explore the Netherlands Life in Utrecht