University of London, Royal Holloway, is in the Surrey countryside on the top of a hill near the rural, commuter town of Egham. The university is known for performing arts, athletics, and a wide range of courses in science and the social sciences. Almost a third of Royal Holloway students are from outside the UK. The student community is close-knit and class sizes are small. Egham is a traditional English town where you'll be able to experience British culture. Plan a day to tour the royal residence of Windsor Castle, just an hour away by train through the green English countryside.

University of London, Royal Holloway, is near the rural town of Egham, 40 minutes southwest of central London. While some distance from big-city life, the campus makes up for it by being just 10 minutes from London’s primary airport, Heathrow. Founded by two social reformers and originally opened as an all-women's college, Royal Holloway keeps to its change-making reputation. Students and staff chose to name the newest building on campus after the suffragette and Royal Holloway alumna Emily Wilding Davison. Many Royal Holloway academics are advisors to the government on a range of critical issues, like combating radicalization and terrorism and how to address global climate change. Built around the stunning 19th-century Founders’ Hall, modeled after the French Renaissance-style Chambord Castle, the campus is spacious, park-like, and largely residential. The library offers separate study zones to accommodate every type of learner from silent to social, creative to collaborative. 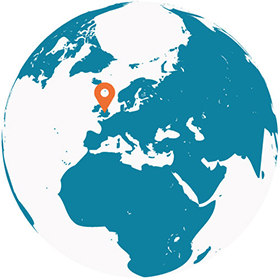